Why I Tried Piano Lessons

When I was eight my best friend from across the street took piano lessons and so I wanted to also. She taught me to play “Chopsticks” but I dreamed of being able to perform like she did. Valerie played like a goddess. Thick dark hair waved down her erect back while she slid her hands along the white keyboard. When we put on shows I’d be the choreographer, director and star. I would even design the costumes with clothes and accessories from the dress-up box. Our stage was the landing above the sunken living room and Valerie played the grand piano below. Her younger sister, Susie and my sister, Leslie were the backup dancers.

My favorite piece was the one that we composed ourselves. Valerie played the high notes and Susie and Leslie would gracefully flit around as sunrays. Then the music would switch to the low notes and even some of the black keys and I’d sweep in as the storm, push our sisters off stage and begin my solo by pounding and swooping my body around. I made sure this section went on as long as possible. After awhile I’d start to fade, cue Valerie and the music would segue again back to the sun. As Leslie and Susie returned to the stage I would dramatically die onto the ground.

For some reason all of this didn’t satisfy me. I also loved to sing and imagined myself playing the piano with my voice clear and sweet leading a class in “Doe-a-Deer.” Or maybe even playing and singing with the children of my future husband, a captain with seven children like Maria had. Yes, I was a big fan of Julie Andrews and knew every word to every song from the Sound of Music and Mary Poppins by heart with an English accent. I could even say “dociousaliexpilisticfragicalirupus” that’s “supercalifragilisticexpialidocious” backwards.

When I told my mom I really wanted to take piano lessons too she asked, “Aren’t ballet lessons enough?” But I begged her until she finally relented.

The diamond on Mrs. Burgess’s finger jumped up and down like a bouncing ball as she demonstrated the scale. “Now you try,” she said and smiled her orange lips. A Lucille Ball wig slightly askew on her head. Raised eyebrows looked as if they had been drawn on with a magic marker. The rumor was that the widow had been a Vegas showgirl but I didn’t believe it. Her hips seemed too wide under that voile dress. I pressed my fingers on the keys beside hers and followed the sequence of notes. My hands were still tiny then and I found it hard to navigate and push down on the slippery keys. “Like this.” She curled her polished talon-like nails over mine. I tried again and this time it felt easier.

I promised to practice every day and with pride carried home the red covered Level I Piano Book and specially lined staff-paper with notes written on it just for me.

Even though I really wanted to get those gold star stickers like Valerie had pasted all over her music books when I sat down to practice I would get distracted; start singing and want to get up and dance instead. What had I gotten myself into? Each week I grew more miserable. My mom made me stick it out for a year, which was long enough to learn how to read basic music for auditions later in life. I soon returned to directing and realized Valerie’s piano playing freed me up to do what I do best: be the star of the show. 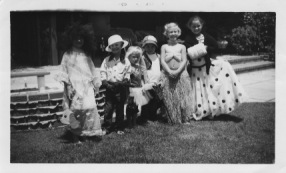