Why I Wrote The Black Velvet Coat

After leaving an over twenty-year career as a public school educator I turned to writing. I thought perhaps I’d create a children’s book or maybe even a memoir about teaching in the inner-city classroom, but that’s not what happened at all. I began to attend a weekly drop-in writing group, Tuesday Brown Bag with Judy Reeves that offered prompts with timed-sessions. Writing in community helped my pen stay on the page and continue going even when I wanted to stop. A few months later, characters and settings started to appear on the page as if from nowhere. And then began showing up week after week, time and again luring me to tell their stories. I felt them with me everywhere including in my dreams. Soon I got hooked and at home began to use Judy’s A Writer’s Book of Days, to inspire me more often than once a week and developed my daily writing practice. I signed up for workshops, classes and writing marathons and then just kept on going. 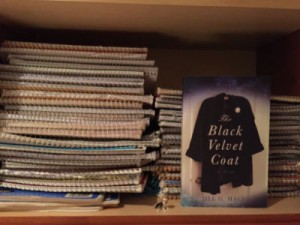 A couple of years later I had a stack of journals and joined a read and critique group led by an expert novelist, Amy Wallen, of Moon Pies and Movie Stars. It wasn’t until then that I even started to type up the pages. Using the weekly deadlines for motivation, I kept sharing chapters with the group for feedback. That first typed draft I didn’t know what I was doing. My writing mechanic skills were zilch. The chapters were a mess and all out of sequence. But Amy and the other members were very patient and encouraged me to continue and helped me hone my craft. After that full draft I was able to put it in some kind of order and indeed I did have a full story. In fact two that correlated into one book. I joined another group, did another draft, then more rewrites, editors, more rewrites, submissions, working with a publisher and now after over ten years The Black Velvet Coat is coming out into the world!